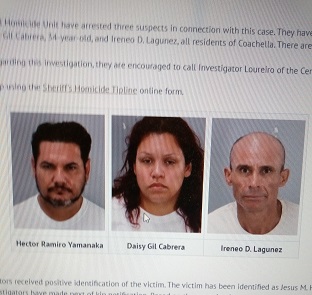 Back on Thursday July 14th 2022, at 2 in the morning, deputies found the body of a man inside a burning pickup truck in a date orchard on Avenue 60 in Thermal.

Two weeks later, on July 29th, the Coroner identified the victim as 35 year old Jesus Hernandez of Coachella. He was the victim of a homicide.

They are Hector Ramiro Yamanaka, Daisy Gil Cabrera, and Ireneo  Lagunez, (left to right in photo above), all residents of Coachella.

There are no outstanding suspects.