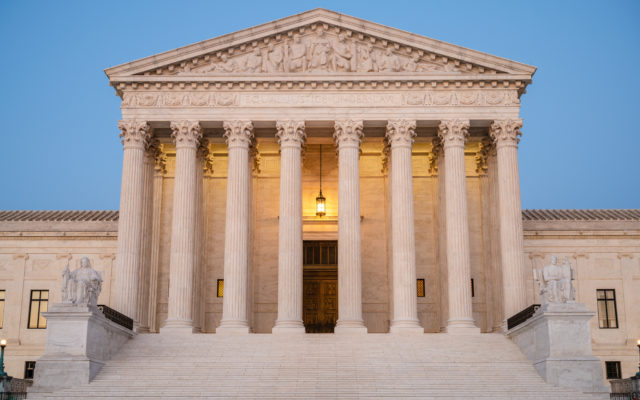 Exterior of the Supreme Court of the United States in glow of early evening setting sun. Located close to US Capitol building in Washington DV, USA Photo from Getty Images, via Alpha Media Portland OR

The United States Supreme Court has ruled in favor of private property rights.

In a 6 to 3 verdict, the High Court ruled California farms can keep union organizers off private land in most cases.

The case began in 2015 when a Fresno grape and citrus grower wouldn’t let union organizers onto the farm to recruit farm workers to join the union.

At the time, that was in violation of a State of California law, that actually allowed union leaders to talk to workers for up to three hours per day, 120 days per year.

But the U-S Supreme Court has ruled in favor of the property owner, calling California’s “right of access” law a violation of the U-S Constitution’s protection of property rights.

In another case, SCOTUS ruled in favor of a cheerleader, saying a Pennsylvania School District violated the cheerleader’s right to free speech when it suspended her from school.

The cheerleader was on the junior varsity cheer team, and did not make the varsity squad.

Her response was a profanity-laced  post on social media.

She was suspended from school, even though she made the post on her free time, over the weekend, off-campus.

But in an 8 to 1 ruling, the High Court said the cheerleader has a right to free speech and should not have been suspended from school.

Photo from Getty Images, via Alpha Media Portland OR