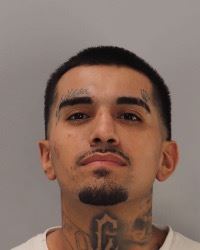 Another criminal street gang member is under arrest in the Coachella Valley.

At 7 in the morning on Saturday July 17th 2021,  the Coachella Community Action Team,  and the  Southern Coachella Valley Community Service District Team served a search warrant at two residences located in the 84-100 block of Calendula and the 84-400 block of Avenue 52, both in Coachella.

Documented gang member 23 year old  Eddy Flores of Coachella, was arrested for theft, burglary, possession of a stolen vehicle, drug possession and two felony warrants for being a parolee at large.   He was booked into County Jail in Indio.

Anyone with any information regarding this incident is urged to contact Deputy Ruiz with the Riverside County Sheriff’s Department at (760)863-8990, or Crime Stoppers at (760)341-STOP (7867).