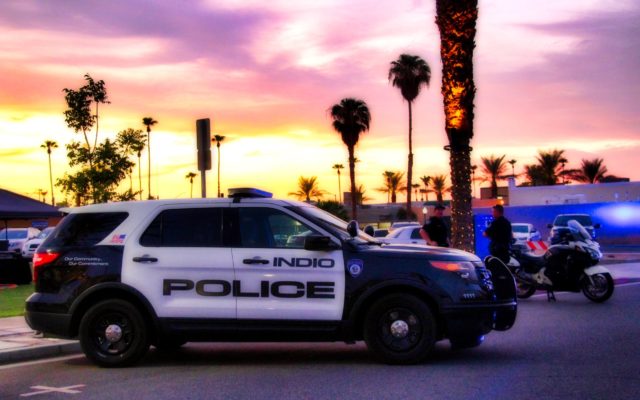 Photo of Indio Police Department squad car with palm trees and sunset in the background. Photo from Indio Police Dept. Facebook Page
Wednesday July 20th 2021
From Indio Police Chief Michael R Washburn:
Attached is my statement regarding the vote of no confidence the Indio Police Command Unit published and spoke about today.   If you choose to use it in a story or post, please include the entire statement.
Due to the sensitive nature of this situation, I will not be providing interviews or comments.
Thank you,
Mike Washburn
Statement:
I welcomed the in-progress investigation into the allegations leveled against me and Assistant Chief Shaefer by the Indio Police Command Unit’s attorney; however, I am disappointed that they would not provide me the same consideration that I give them – to make fact-based decisions and judgements instead of reaching conclusions based upon unsubstantiated allegations.
While the Indio Police Department has a strong reputation with our community, and is comprised of stellar officers of integrity and character, there are a handful of influential individuals who are concerned about the level of accountability I have held them to since my appointment in 2016. While the majority of our department embraces accountability, and being held to a higher standard as a point
of pride; there are few individuals that have a difficult time accepting that lapses of moral character, the same standards upon which we judge our police officer candidates in their background investigations, are usually career-ending.
Additionally, due to California’s restrictive stance on police disciplinary records, even union leaders are not privy to the facts on which a police chief makes his or her disciplinary findings – unless the disciplined employee chooses to share it. This creates an unhealthy situation in which department leadership can only say, “there is more to it, but I am not allowed to discuss it.”
The City of Indio hired me knowing that I had a long history of being involved in, and even driving police reform – particularly in the areas of de-escalation, transparency, accountability and use of force. I was literally at the table with the U.S. Department of Justice negotiating Seattle’s consent decree and later had a key role in ensuring the Seattle Police Department’s compliance to that agreement.
Make no mistake about it, the Indio Police Department is a good department and I am proud to lead it; however, I have brought about change which a small group are uncomfortable with and purposefully mischaracterizing for their own self-serving agendas. At the end of the day this change is necessary in a forward-thinking agency like ours – and universally expected by those we serve. When chiefs fail to
make those changes, the result is often a public demand for civilian oversight.
The City of Indio can expect IPD to be at the forefront of progressive policing while its employees – to include me – are held to the highest standards of professionalism and accountability. This will continue as long as I have the honor of serving as Indio’s police chief and will be sustained by a healthy and enlightened organizational culture.

Photo of Indio Police Department squad car with palm trees and sunset in the background.