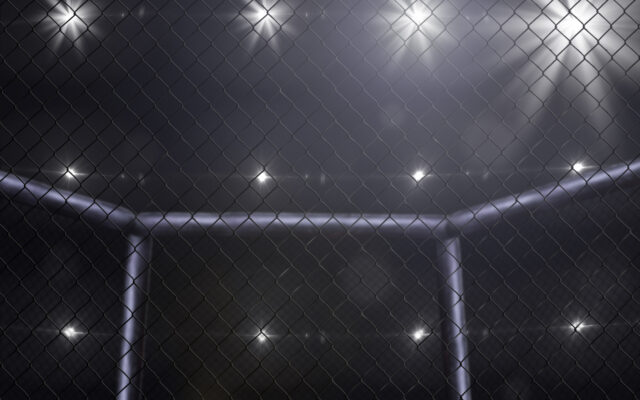 empty mixed martial arts fighting cage, inside an arena under the lights. Photo from Alpha Media Portland OR

high prices for fuel and utilities, emptying of California prisons–returning criminals to the streets,  The California Legislative

Women’s Caucus has chosen to ignore all of them.

Instead, the Caucus is putting the  focus on the  man in charge of a professional fighting operation known as The UFC.

That’s a global company that puts two martial artists in a cage,  and pays them large amounts of money to fight, until one of them cannot fight anymore.

The public face of UFC is Dana White.

He’s in trouble for slapping his wife Anne in the face on New Year’s Eve at a party in Mexico.

Anne White had initially slapped Dana White in the face, causing Dana White to retaliate and slap his wife.

They have been wife and husband for more than 30 years, and both admit they had swallowed too much alcohol that night, prior to the slapping.

The California Legislative  Women’s Caucus has sent a letter to the CEO of UFC parent company Endeavor, Ari Emanuel, demanding the immediate firing of Dana White from his post of President of The UFC.

Legally, The California Legislative Women’s Caucus has no jurisdiction whatsoever in this case.