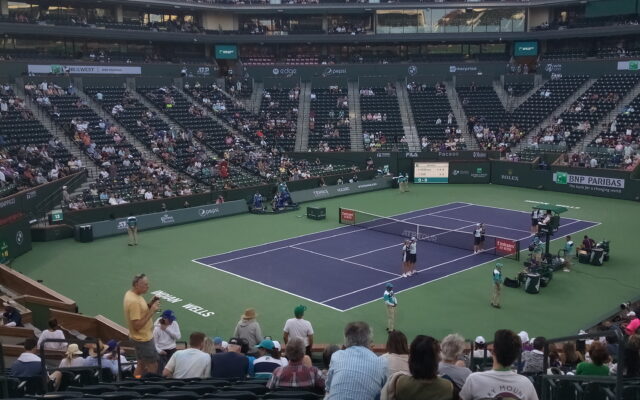 The BNP Paribas Open in Indian Wells is growing again.

Look for new amenities, new retail partners and new events when the tournament rolls into town March 6th through the 19th 2023 at the Tennis Garden.

The ‘new era’ of Tennis Paradise will feature an enhanced on-site retail experience; a trio of prestigious brand partners; a number of new food and beverage offerings; and the first-ever BNP Paribas Open Junior Championships for fans to enjoy free of charge.

The BNP Paribas Open has partnered with global premium experiences company Legends to operate an enhanced on-site retail experience at the two-week tournament.

Luxury cruise line Seabourn will have a hospitality lounge at the Tennis Garden.

Maestro Dobel®  will be the Official Tequila of the BNP Paribas Open.

Pink’s Hot Dogs of Hollywood Fame, will be selling wieners at the Tennis Garden.

Lionel’s Fountain,  Handel’s Homemade Ice Cream,  Chef Tanya’s Kitchen, and  Ristorante Mamma Gina  will all be encouraging you to eat.

The 2023 BNP Paribas Open will usher in the first-ever  BNP Paribas Open Junior Championships, during the second week of the tournament, offering promising junior tennis players the opportunity to play alongside the professionals.

This combined boys’ and girls’ event will feature junior players from the United States and Canada, with plans to expand to a full international player field in 2024.

In addition, a new, free Family Day event will be held on Saturday, March 4, and welcome families with children of all ages for a host of fun activities including tennis, live entertainment, arts and crafts, games and more.

Tickets and packages for the 2023 BNP Paribas Open are now on-sale online at tennisparadise.com, via phone at 800.999.1585 (Option 2), or in-person at the Indian Wells Tennis Garden Box Office.

Steve Christian has been promoted to Chief Operating Officer.

Philippe Dore has been elevated to Chief Marketing Officer having overseen the organization’s marketing and media department since 2016.

He’s the guy who came up with the phrase ‘Tennis Paradise’  as part of the marketing campaign for the BNP Paribas Open.

Brittany Trabert was also promoted to Marketing Director, having been a key contributor to the Desert Champions marketing and media team since 2008.