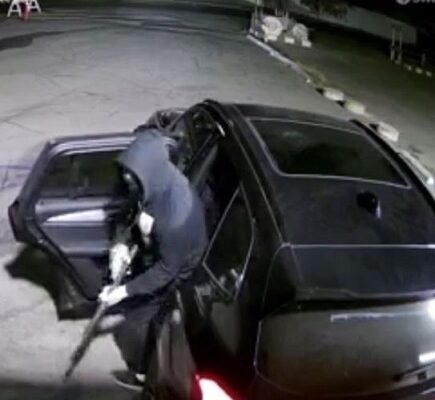 Armed thief getting out of stolen black car, getting ready to rob a liquor store in Norco CA Aug 2nd 2022. Photo from Riverside County Sheriffs Dept

Four men, all in their 20’s had nothing better to do around 3 o’clock in the morning on Sunday July 31st 2022 but to steal a car, and some guns, then walk into a store and rob it.

All the suspects had hoods and facemasks on, and were carrying rifles when they barged into liquor store in Norco.

They did not realize the 80 year old owner was at the store and had a shotgun behind the counter.

He opened fire, forcing all 4 suspects to run like hell.

Sheriffs deputies caught up with them at a local hospital where one of them is in critical condition with severe injuries to his arm, as a result of being shot by the store owner.

The other suspects are jailed on half a million dollars bail each.

The primary suspect, a 23-year-old male, remains hospitalized in critical, but stable condition, and his identity will not be released at this time.

The 80 year old owner suffered a heart attack minutes later and is recovering.

Armed thief getting out of stolen black car, getting ready to rob a liquor store in Norco CA Aug 2nd 2022.