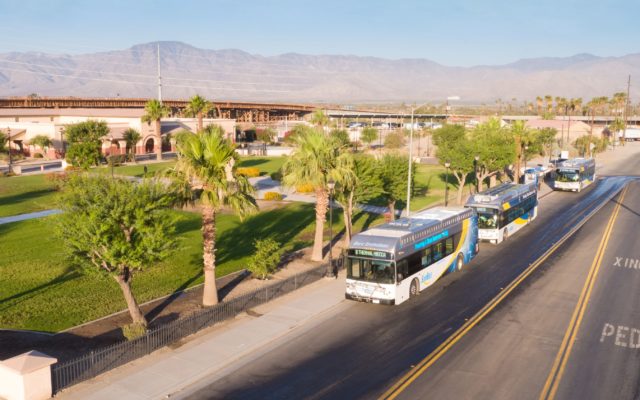 SunLine Transit Agency  is splitting its  Route 1 that spans the valley.

Service will now be Route 1WV and Route 1EV

Route 1WV starts at Palm Canyon Drive and  Stevens Road in Palm Springs, and goes to Town Center Way at The Shops  in Palm Desert. It will serve Desert Regional Medical Center, Downtown Palm Springs, and City Halls in the West Valley.

Route 1EV starts at  5th STreet and Vine in Coachella, and ends at The Shops in Palm Desert.  It serves Downtown Coachella, JFK Hospital in Indio, the Larson Justice Center in the heart of Indio, and most City Halls in the East Valley.

SunRide – an on-demand rideshare service that was introduced as part of the SunLine Refueled initiative in January 2021 – has now added its seventh Coachella Valley zone in Palm Springs. Aside from the new Palm Springs zone, other zones are located in Cathedral City, Coachella, Desert Hot Springs/Desert Edge, Indio, Mecca/North Shore and Palm Desert. Customers get picked up from any bus stop identified as a SunRide stop or a virtual stop defined in the geofenced zone. To book SunRide, passengers within any of the seven zones use their SunRide mobile app (which can be found searching the App Store) to schedule trips within approximately 15 minutes or up to seven days in advance.

Another opportunity now available through the January 2023 Service Changes are discounted $1 fares for select trips on SunLine’s 10 Commuter Link regional service that travels to and from San Bernardino Monday-Friday.

Photo of a SunBus in Mecca CA.